The malley family can trace its origins to the Portugal through Joseph Mille who immigrate to Australia in 1853. He married Irish born Margaret Carey and raised a family in the Gosford area of New South Wales.

He was naturalised in 1856 (as shown on the attached certificate) indicating his desire to remain in the "colony".

When they were born, his children were recorded under the surname Melle but in about 1862, all the family changed their name to the Anglised "Malley". 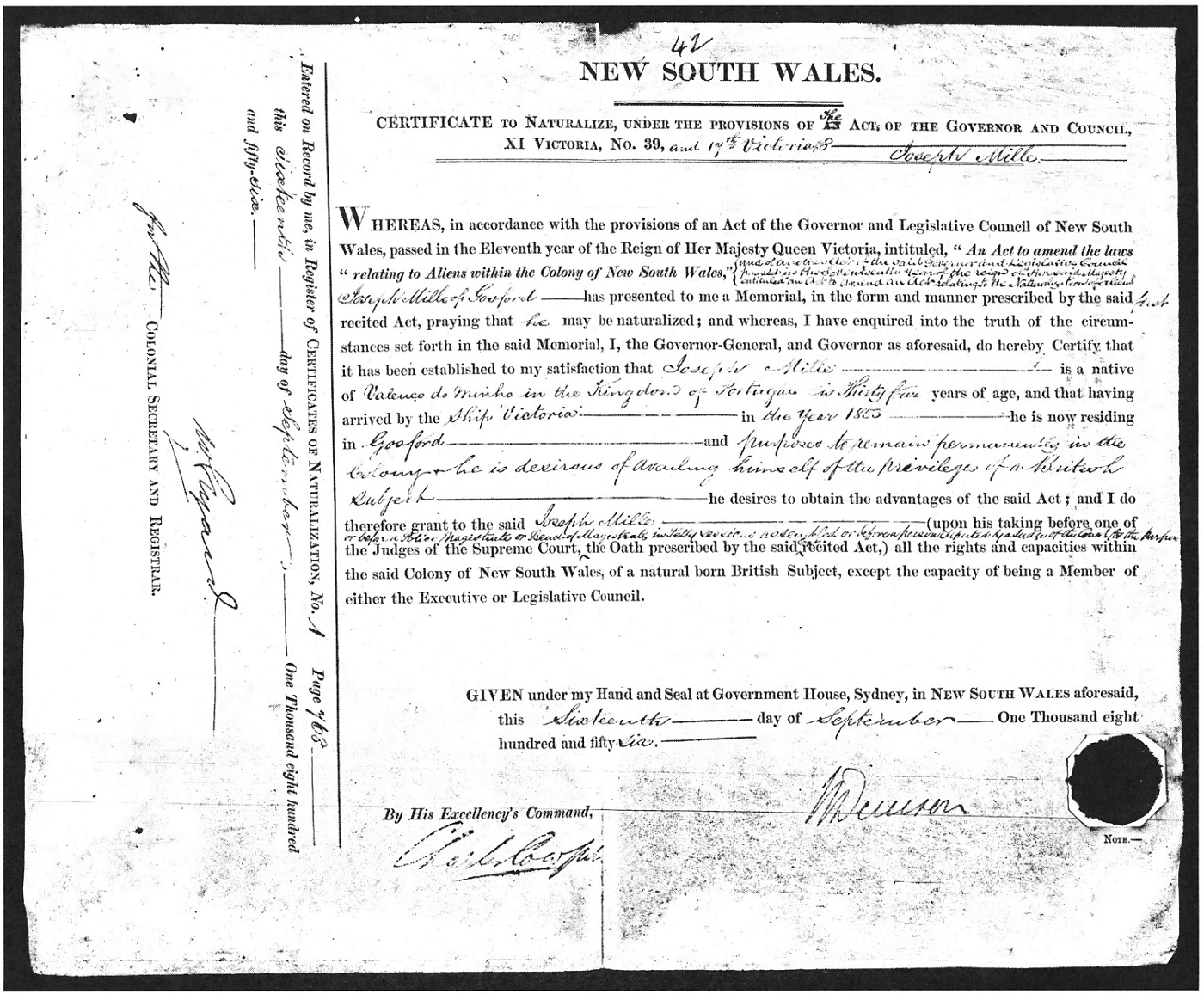 The surnames of Joseph and Margaret's four children were originally recorded as "Melle" but their various marriage certificates (between 1883 and 1887) identify them under the name of Malley. Joseph was also identified as Joseph Malley in 1883 but it is not yet known when they changed the names.

Mary Ann Melle also bore the surname Malley by the time she married William Joseph Hutchison in 1883, and at that time she was working as a fruit seller in Park Street Sydney.

The couple lived at Newtown and then Redfern raising five children.

After William died in 1913 it is believed she moved to Coogee living near her daughter Vera.

Joseph Mille/Malley's son Francis Malley was the founder of the company, Malleys Ltd., which became a household name through products like the Malley Whirlpool washing machine.

The following article has been transcribed from The Canberra Times, Fri. 25 Nov 1966, Page 34.

THE history of Malleys Limited has been one of almost continuous development and progress since 1884, when Mr Francis Malley commenced business in James Street, Sydney, as a sheet metal worker making products for the building and plumbing trades.

Later this business was transferred to premises at the corner of Kent and Liverpool Streets.

In 1910 larger premises were acquired in Mountain Street, Broadway, and the Company, F. Malleys and Sons Limited, was formed. The firm was directed by the founder and his two sons, Charles and Clyde Malley.

Following rapid industrial expansion due to the first World War, reconstruction of this business was necessary.

The company, Malleys Ltd, was formed and three acres of land were purchased at Alexandria for factory expansion. The business continued to make rapid progress in manufacturing and selling through distributors. In 1919 a chain of retail hardware stores was set up throughout the metropolitan area.

During the second World War the company was actively engaged on war production. Food containers, ammunition racks, ammunition boxes and a host of other urgently needed items flowed from the Malley factories. Due to its good will throughout the trade the company experienced little difficulty in resuming peace time activities.

In 1945 total employees were in the vicinity of 500, but today they number 2,200. Post-war expansion has been very rapid both in the growth in the original sheet metal engineering business and by development of a range of household appliances.

In an effort to apply the whole of its resources to manufacture, Malleys retail outlets were disposed of in 1951 and since that date the company's products have been marketed through normal distribution channels.

To provide for further factory expansion 11 acres of land were purchased at Auburn in 1946. This expansion was also facilitated by absorption of other companies operating in similar fields and has resulted in Malley's manufacturing activities being substantially expanded.

One such company, United Metal Industries Limited, Brisbane, manufacturers of a wide range of domestic appliances marketed under the UMI brand name, became a wholly owned subsidiary of Malleys Limited in 1961.

Today the company has manufacturing facilities at Auburn and Alexandria in Sydney, Woolloongabba in Queensland and selling branches in Melbourne, Brisbane, Adelaide, Newcastle and Canberra. Agency arrangements exist in Western Australia and Tasmania.

Through a licensing arrangement with Whirlpool Corporation , of America, Malleys has brought to its factories in Sydney and Brisbane the vast technical facilities of this giant American organisation.

During the 80 years of its development Malleys have established a fine reputation for the manufacture of a wide range of consumer goods including appliances, builders' hardware, sheet metal products for domestic and commercial application.

Garnet Francis Malley was the third of Francis's four sons. He  was a decorated WW1 pilot and served again during WW2.