The surname Bryant can have a number of possible origins:

One is patronymic in origin (derived from the first name of the father). In this case it means 'son of Bryan', a name that enjoyed great popularity in Brittany from where it was introduced into England by the Normans in the wake of the invasion of 1066. The personal name itself derives from the Celtic word meaning 'strong'.

A variant of Bryan, Brien, was brought into England through Ireland by the Norsemen and the two are often confused. One differentiating feature however, is that the Norman Bryants tended to settle in southwestern England while the Norse Briens settled in the north.

Also, Bryant can be a variation of the English surname Bryan from the Celtic given name Brian containing the element 'bre' - hill, used in the transferred sense of 'eminence'. Bearers of this name accompanied William the Conqueror in the Invasion of England in 1066 and went on to invade and settle in Ireland in the 12th Century.

A far as we know, our Bryants forebears and other related families lived in the English county of Kent for generations as farmers or agricultural workers. By the 1790s the Bryants made their home in the village of Benenden near the eastern edge of the High Weald close to the Sussex border.

Benenden (or Benindene) was recorded in the Domesday Book (of 1086) and was an area used for pig pasturing (dens) from Saxon times.

The parish church of St. George, which features in our family's history, was first built in the 13th centiry on the site of a Saxon chapel and was one of the earliest in the region. Benenden St George is an ancient parish in the union of Cranbrooke, hundred of Rolvenden, Lower division of the lathe of Scray, W. division of Kent, 3¼ miles (S. E.) from Cranbrooke. The church was damaged by fire from a lightning strike in the 17th century and rebuilt and later restored in 1862.

By the late 18th century and early 19th where we find our Bryant ancestors, it was a difficult time for the people on the land. Poverty was rife in that period and the Enclosure Act of 1773 further contributed to the plight of rural farmworkers. The Act enabled the fencing and denial of access to common land that had been used for centuries by the poor of the countryside to graze their animals and grow their own produce.

Between 1770 and 1830 about 6 million acres of common land were enclosed and divided up among the large local landowners, leaving the landless farmworkers solely dependent upon working for their richer neighbours for a cash wage. (Wikipedia)

This together with other pressures such as the surplus of labour after the Napoleonic Wars, increased Irish immigration, falling agricultural prices and especially the introduction of labour-saving threshing machines, finally led to a series of uprisings known as the Swing Riots. These started in East Kent but spread throughout south-eastern England.

Nearly 2,000 people were brought to trial following the riots, some were hanged, imprisoned or transported but many were pardoned. Despite the resultant Poor Law Amendment Act followed in 1834, rural poverty still remained a serious issue.

Historian Ernie Pollard in his The History of Benenden in the Weald of Kent (http://www.benenden.history.pollardweb.com/) explains that:

“Emigration, one way of attempting to escape poverty, was encouraged after 1830, as it was before. About a further 160 Benenden people, about a tenth of the population, are thought to have emigrated between 1831 and 1841, and one journey of local families on the Maitland to Australia in 1838, has been well documented. Many of the 316 emigrants on board came from parishes in Kent and Sussex, [including] Benenden families…”

From 1831 the British and Australian colonial governments subsidised or paid for thousands of migrants to move to Australia.

Our ancestor, William Bryant decided to emigrate from Benenden to Australia at the age of forty years under one of these scheme when the age restrictions were relaxed in 1837. With wife Ann (Austen) and their seven children he boarded the Westminster at Gravesend on 25 March 1838.

On his website, Bruce Fairhall ,whose ancestor were aboard the Maitland, provides further details of emigration. He also includes details of other Austins and Bryants who emigrated to Australia from Kent in June 1838 on the Maitland, and who were possibly related to our ancestors. 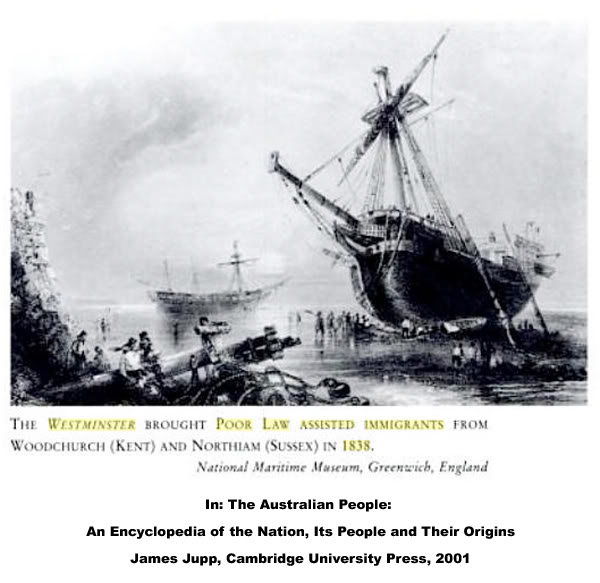 Our Bryant ancestors arrived in Australia on the ship, Westminster in 1838.