The Trott One Name Research Group indicates that the family name of Trott has a number of possible origins: patronymic or baptismal, "son of Trott" from personal names; occupational such as "a messenger", as in Trotman; or a nickname such as "the true and faithful man" from Middle English or old French that developed into "Trott".

Although it does not necessarily indicate the origin of the Trotts, the name is historically more prominent in the English West Country counties of Devon, Cornwall, Dorset  and Somerset. In county Somerset a John Trout is recorded around 1327.

Currently, the earliest known of our TROTT ancestors is Thomas TROTT who married Sarah Keetch in Somerset. They were the parents of Samuel TROTT who married Jane DOLLIN "after banns" at the parish church Dunster, Somerset on 1 June 1857. At that time Samuel's occupation was given as carpenter journeyman.

Jane DOLLIN was the daughter of John DOLLIN and Mary Ann GOULD, born at Dunster on 6 June 1841. John's occupation was given a mason.  Their son John Dollin TROTT was born in Dunster on 20 December 1859 and baptised on 12 February 1860. 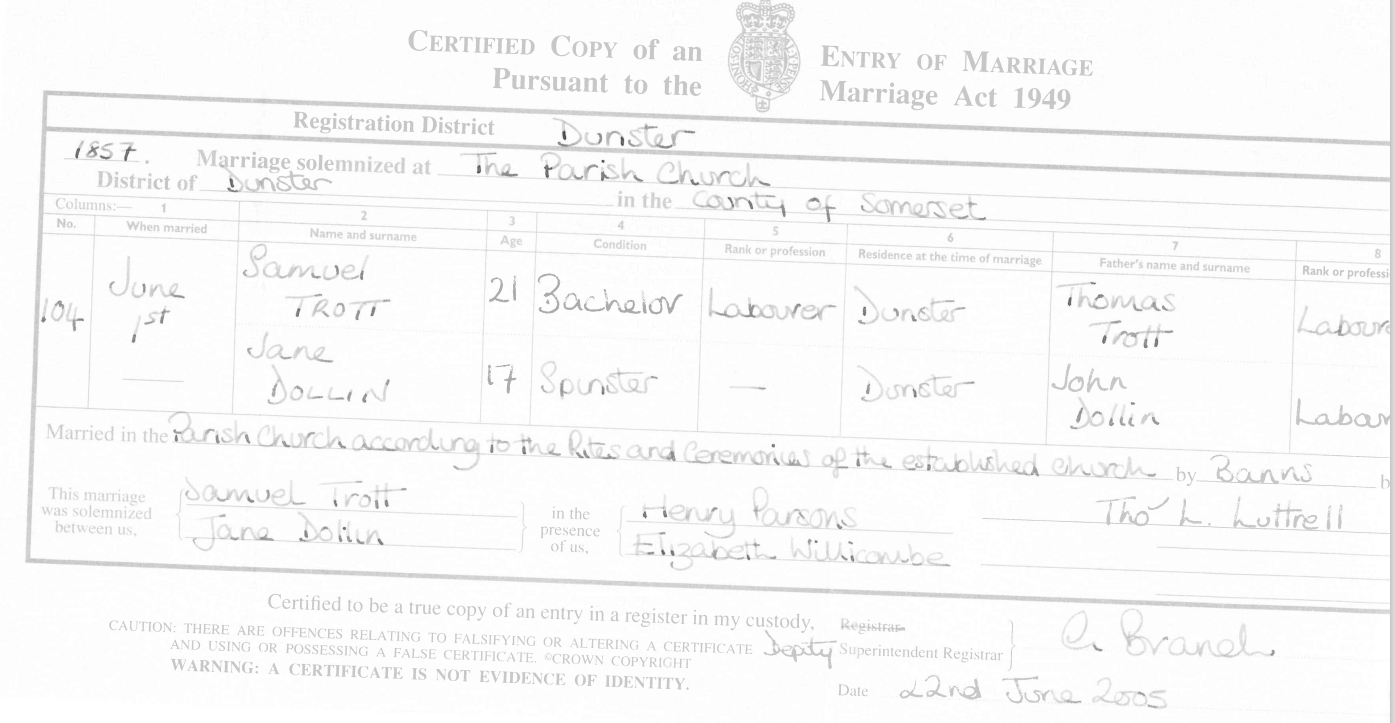 Dunster is situated in the west of the County of Somerset on the Bristol Channel coast 2.5 miles south south-east of Minehead and 20 miles north west of Taunton.

The Tor at Dunster, a steep hill overlooking the village, is said to have been home to a castle for more than 1000 years. During Saxon times, it served as a frontier fortress against Celtic and Viking raiders and is recorded in the Domesday Book. Remnants of a Norman castle remain but it was redeveloped in the 17th and 18th centuries and remodelled in the 19th century to emphasise its medieval origins, and accommodate a large family and their many servants.

The parish church of St George has a long history dating from the 11th century and was rebuilt as a Norman church including the nave and south aisle by 1500. One of the main features is the locally carved rood screen that is thought to be the longest in Europe.

John Dollin TROTT immigrated to Australia in 1884, arriving in Sydney on the Kildare.

John was a mariner when he married Hannah THOMPSON at Sydney on 23 November 1887. Hannah's family had been in Australia since 1791 only three years after British settlement.

Hannah's great grand parents James THOMPSON and wife Eliza (nee SAWYER), together with their five children, arrived in Sydney in 1806 on the William Pitt as free settlers. James was carpenter who had premises at Brickfield Hill for about five years before moving to the Hawkesbury area.

The Trott convict connection is as far back as the Third Fleet. James and Eliza THOMPSON's son Walter married Mary Anne SHERRINGHAM who was descendent from three convicts: her father Robert SHERRINGHAM, and Jacob RUSSELL and Eleanor DAVIS, who were the parents of Robert's wife Elizabeth DAVIS.

Robert SHERRINGHAM was born in Norfolk, England on 15 April 1781. He stole some shoes and tools from a shop and was sentenced to 7 years transportation, arriving in Sydney on the Minorca on 14 December 1801. He married Elizabeth DAVIS, who was born on 20 August 1796, on 5 July 1811 at St Matthews Church of England, Windsor.

Eleanor DAVIES stole some clothing (valued at 7 shillings and 4 pence) and, in the Old Bailey on 27 May 1790, was sentenced to 7 years transportation. She arrived in New South Wales on 7 July 1891 in the Mary Anne a female convict ship, which was part of the Third Fleet.

Eleanor fell pregnant on the Mary Anne and soon after her arrival married another convict, Alexander SEATON, to whom she had another child. When these two split up after a few years Eleanor set up house with Jacob RUSSELL.

Jacob RUSSELL was born about 1768 and after being sentenced in Warwick to 7 years transportation arrived in New South Wales on the Salamander on 21 August 1791 also as part of the Third Fleet. Eleanor and Jacob had a daughter Elizabeth DAVIS, born on 20 August 1796 and baptised at St John's Church, Parramatta on 26 June 1798 by Rev Samuel Marsden.