The Creech family connection occurred with the marriage of Jane Creech to William Morrison in 1850, and the line is followed back to Robert Creech (b c1690).

Of the Creech origins Lawson states that:

"The name Creech comes from southern England or Scotland. The "Oxford Dictionary of English Surnames" cites an entry in the Rolls for Sussex in 1327, "John ate Creech", John at the creek, hence the name has the meaning of "dweller by the creek". The name appears around this time in Sussex Soffolk, Somerset and Dorset."

In the Isle of Man Lawson indicates that the name appeared in the early 17th century with recorded births,  marriages and burials in the parishes of Braddan, Santan, Onchan and Malew, and later in northern parishes of Lezayre and Maughold.

Robert Creech (b. c1690) of Maughold is our earliest known Creech ancestor. In about 1730 his son Daniel Creech (1711-1775), moved south to the Malew-Santon area where the family continued to live for several generations, before connecting with the Morrison family.

Kirk Santan is dedicated to the Celtic saint, Sanctain who was an Irish missionary St Sanctain and disciple of St Patrick. Over the years, the place name has been corrupted to Santon.

William and Ann Creetch are buried there. 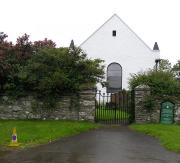 St. Sanctain's Chuch. (for a brief period it was known as St. Anne's) 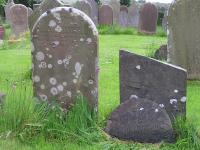 The Grave stone of William and Ann Creetch, at St. Sanctain's 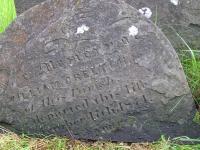